Comgás distributes piped natural gas to the residential, retail, industrial, vehicular, cogeneration and thermal generation markets in its concession area, which comprises metropolitan São Paulo and Campinas, as well as the Paraíba Valley and the southern coastal region of São Paulo State known as Baixada Santista.

Most of the gas distributed by Comgás – currently about 60% – comes from Bolivia via the Bolivia-Brazil pipeline. In recent years, however, abundant reserves have been discovered in Brazil, especially in the Campos basin (Rio de Janeiro State), the Santos basin (São Paulo State) and Espírito Santo State. It is expected that these reserves, along with presalt discoveries, start effectively operating in the next 5 to 7 years. 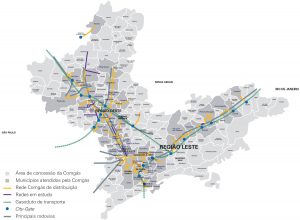 Learn more about the Concession Area

The Energy Sector in Brazil

Natural gas is a mixture of gases frequently found in isolation or together with petroleum. Its main ingredient is methane, which accounts for over 90%-95%. Other components include nitrogen, ethane, carbon, butane and propane.

Natural gas is friendly to the environment, causing far less pollution than other fossil fuels such as petroleum and coal. Its properties enable almost unrestricted use in various segments. It complies with environmental protection laws and makes an effective and efficient contribution to the generation of reliable, versatile energy.

Natural gas is widely used throughout the world, especially in the developed countries and its growth in the Brazilian energy matrix was of 10.3% in 2010 and is projected to be 15.5% in 2030. Average growth of its energy share is 20% per year, according to the Brazilian Association of Piped Gas Distributor Companies (Abegás – local acronym).

The outlook for natural gas consumption in Brazil in the coming years is positive, both because it is a clean fuel and thanks to the expansion of distribution networks, especially by Comgás. Finally, the discovery of new gas reserves in Brazil will tend to increase the share of natural gas in the nation’s overall energy consumption.

The concession area contains industrial plants operating in a range of different segments and selling to a wide variety of markets, as a direct result of the work done in customer prospecting by Comgás professionals.

Consumption of gas in the industrial segment has increased in absolute and relative terms, both compared with other fuels and as a share of total gas consumption across all segments. Natural gas is more economical than other fuels, pollutes less and has greater calorific efficiency.

Gas applications in industry are numerous and highly diversified, ranging from heat and low-pressure steam production to processes that require burning without waste and with very precise temperature control. Chemicals and petrochemicals, ceramics, paper and paperboard are examples of industries that are increasingly substituting other fuels for natural gas.

This market is profitable and accounts for the largest customer portfolio of all.

The focus for Comgás has traditionally been on connecting as many apartment buildings as possible and the company is the leader in this segment. The House Connection Project launched in September 2004 prioritised connecting single-family dwellings by expanding the gas distribution network via the pedestrian pavement, followed by apartment buildings and retail establishments. This method greatly reduced costs and pipe laying difficulties compared with the regular method.

A good example of customer care is Casa Comgás, a showroom with more than 20 working gas-fired home appliances. Besides demonstrating the variety of uses to which natural gas can be put in the home, the showroom offers personal service and technical guidance for customers, prospects, architects and professionals from the construction industry. Opportunities for hands-on experience help visitors understand the benefits of natural gas and recognise its advantages over other fuels.

Large ans small establishments are the focus for expansion in this segment, which promotes greater diversification of natural gas applications and links to expansion in other segments.

Customers in the retail market can be differentiated by:

Natural gas for vehicles (NGV) fuels cars, trucks and buses in Brazil, where it is increasingly recognised as more cost-effective and cleaner than other automotive fuels. It requires adaptation of vehicles via installation of equipment to store the gas and feed it to the engine.

Emergency electricity generating, peak generation and cogeneration systems are expanding not only because of their importance to energy conservation and economy, but also due to the environmental benefits compared with traditional diesel generators. Thermal generation produces electricity by burning gas, while cogeneration produces process heat and electric power simultaneously from the same fuel. The most widely used cogen systems are powered by a gas turbine, steam turbine or alternative engine.